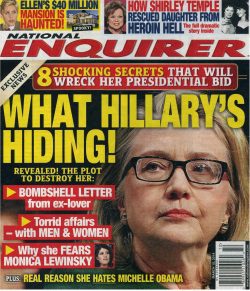 While the press and politicos like Mitt Romney and MSNBC’s Joe Scarborough debate the relevancy of revisiting Hillary’s co-president role during the Clinton White House era, the National Enquirer goes where the mainstream press treads not and called me last weekend about Hillary and the death of Clinton White House lawyer Vince Foster.

Days later, suddenly I’m Secret #1 and Secret #2 in the Enquirer’s “blockbuster world exclusive” cover story: 8 Shocking Secrets that will Wreck Her Presidential Bid. What Hillary’s Hiding! Revealed! The Plot to Destroy her.

It was such a well kept secret that I didn’t know about it either.

Apparently, according to some super duper secret sources I’m a part of a shadowy dirty tricks campaign that is bankrolled by mega wealthy anti-Clinton factions to the tune of half a billion dollars.

Wow! Half a billion dollars. That was news to me and I hope it’s true because I could use some back-up getting out the info on Hillary that is documented in my books, The Whistleblower: How the Clinton White House Stayed in Power and Following Orders: The Death of Vince Foster, Clinton White House lawyer.

The fact remains, when it comes to Hillary, no dirty tricks are required —the truth is damaging enough.

As Secret #2, The Enquirer wrote, “Peschmann also believes that Foster’s death triggered a massive cover-up by the Clinton administration and declared: “Hillary should not be in the White House. She should be in jail.”

That’s right. This is not my opinion. It’s based on facts.

The Clinton’s record of lawlessness is sourced in my books, like this gem from the 1996 Senate Whitewater Committee Report regarding the Vince Foster death investigation.

From my book Following Orders:

The Senate Whitewater Committee called [the Vince Foster investigation] a “sham.” The Committee found that [Hillary’s] counsel’s office, government lawyers, “who were supposed to protect public interest in a proper investigation and faithful execution of the laws, instead interfered and obstructed various federal investigations.”

“Unquestionably, the Department of Justice and Park Police were authorized to conduct this investigation, and White House officials owed them a duty to cooperate. Instead, law enforcement officials were confronted at every turn with concerted efforts to deny them access to evidence in Mr. Foster’s office.”

The committee concluded: “The actions of these senior White House officials constitute a highly improper pattern of deliberate misconduct,” or as it would be called for everyday Americans, obstruction of justice.

In 2004, Stewart was convicted of obstructing justice and lying to federal investigators over selling a stock. She was also found guilty of attempting to lead the government investigation astray and served time in prison.

Stewart’s crimes appear to be far less nefarious than the lawlessness in the Clinton White House—specifically Hillary’s counsel’s office.

Why convict Stewart and not Hillary and her staff for obstruction and lying to investigators?

Where’s the “fairness” in that? 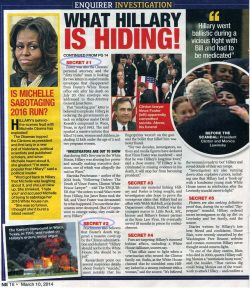 Hillary’s lawlessness record wasn’t isolated to the Foster death investigation. It happened during the other investigations like Travelgate, the first Clinton “scandal.” As reported in my book The Whistleblower, Hillary circumvented the rule of law when she sicced the FBI on the Travel office.

But there is much more. From The Whistleblower:

According to Independent Counsel Robert Ray’s final report: Witnesses’ lack of cooperation took several forms. Not only were private attorneys ordered to instruct their White House clients not to answer questions based on the Clintons’ claim of attorney-client privilege, but the Clinton White House withheld evidence by “refusing to provide subpoenaed documents.”

Hillary 2016. Prison or POTUS (President of the United States)?

Congress, the justice department, and special prosecutors have a constitutional duty to faithfully enforce the laws. They failed in that duty during the Clinton era which arguably has given rise to more lawlessness.

While the latest poll shows that a majority of Democrats want Hillary to run for president, and NBC News is reporting that the Clinton machine is revving up for 2016, don’t voters who were too young to remember the Clinton era and are of voting age today deserve to know Hillary’s real record of dodging indictments?

The Enquirer was correct when they exposed former Democrat Presidential candidate John Edwards. Let’s hope this alleged cabal of deep pocketed anti-Clinton factions The Enquirer is reporting exists is alive and kicking. If so, they should contact me pronto.

There’s nothing wrong with reporting the truth. It’s called journalism. It’s a public service and what the media is supposed to do. No dirty tricks or conspiracies are required.

Update: People should call before they quote from The Enquirer or elsewhere. This is not just an issue for me, but for others. It’s incredible to see how a chopped off quote became a “quote” on the Internet.

The original source regarding any alleged claims about Hillary Clinton’s role in Waco, repeated anywhere, including but not limited to, The National Enquirer, is not me (I did not write about WACO in my books either), it would be Linda Tripp. Linda Tripp served in the Clinton White House counsel’s office. She was there when Waco happened and has spoken publicly about it.

Examples claiming I am the original source from the Internet echo chamber include, but are not limited to:

7 thoughts on “Exclusive to the Enquirer’s Hillary World Exclusive”